I wrote in 2018 about my favourite BG meters. Although the BG-meter market has developed a bit with some models disappearing and a bunch of new options, my faves haven’t really changed.

This has remained my go-to meter. I have one that goes with me in a pocket, and another that usually stays on the bedside table for in case I need to double-check a CGM alarm in the middle of the night.

I find it’s a convenient form-factor and size. There’s the “flat” strip container and the strip-eject button, and the fact that the port light comes on by default. As described in an earlier article, I use an empty Guide strip container as a receptacle for used strips. The overall pouch size is fairly compact and easily slips into a pocket, and I can get it out and do a test without having to set it down on a flat surface. 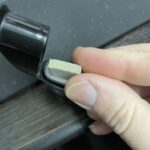 Some people report hassles getting individual strips out of the “spill-resistant” container, but that usually works great for me.

The meter was originally paired (via Bluetooth) with the Accu-Chek Connect app, but these days the official support is for MySugr. It also works with other apps such as xDrip+, but I use MySugr simply as a collection point for the readings from my multiple meters.

I also have several of these little meters and they’re not too bad. I do have to remember to turn on the port light each time I want it (before inserting the test strip!) and the strip container is less convenient and enlarges the overall size of the meter package a bit, but it works well.

The meter comes with the Contour phone app for uploading results, but I have not found this as reliable as MySugr. If the app hasn’t been running recently, the meter usually does not manage to upload the data. But if I start up the Contour app again and power on the meter, all the missed readings do soon update. I don’t find this with the Accu-Chek meter and MySugr.

Incidentally, because I have these apps on an iPhone they’re both updating the Apple Health database. MySugr happily imports the values saved by Contour and thus ends up as my central repository of results. Contour doesn’t read other values back from Health.

But how accurate are they?

Accu-Chek doesn’t seem to have made any particular claims about the accuracy of the Guide.

In my 2018 testing (see “Do you trust your meter?“) I found that the Guide and Contour Next meters seemed to have similar accuracy (and better than most other devices I tested) which made me comfortable with using both of them interchangeably. In the end the Guides have ended up as my usual meters mainly due to convenience.

What if I had access to a lab reference? 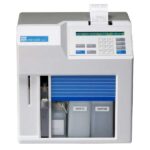 But I didn’t have access to a laboratory reference BG value, and had to resort to comparing the meters (and others) against each other. It just so happens that I did get access to a YSI 2300 analyser this year. These are the usual choice for lab-reference blood glucose measurement.

I have had access to one on an incidental basis through my recent work, but not only does each test have a monetary cost but it also requires a lot more blood than a fingerprick BG meter. So getting enough samples to be mathematically useful was going to be a challenge. But that’s not the particular YSI I’m referring to in this article!

I have participated in a few trials over the years. The latest has been investigations into a new CGM sensor technology. As part of this I have been wearing multiple sensors for weeks, recording fingerprick BG results into a meter supplied as part of the trial. The trial is using Accu-Chek Guide meters, so I simply connected the meter to MySugr and made it my go-to meter. I have coloured tape on each meter (and case) so I don’t get confused between them.

During the course of the trial, on four days I spent time in the clinic with a cannula in my arm and blood samples taken on 20-minute intervals (using a YSI analyser). I did have my laptop with me and was able to work during those days.

During these times there were “meal challenges” to get my BG moving to different levels. My arm was in a heat pack for the 10 minutes leading up to each sample in order to “arterialise” the blood for optimal testing. Each time arterialised venous blood was taken for the YSI, a drop was also applied to the study BG meter. This will presumably help them calibrate the BG meter data in their later analysis.

Throughout all of this I haven’t been privy to the blinded CGM data, and the study will be analysing everything later. But it’s been interesting seeing what data I have got.

In the end I was able to run my own study. All I had to do was ask for a copy of the YSI data. I did also get a copy of all the other blood results during the trial (pleasingly, the HbA1c was right on target with the estimate from my Dexcom CGM).

I ended up with 76 sets of YSI and meter data. I also gathered some measurements with other meters.

In the following graph, if a dot is on the diagonal line then the meter measured exactly the same value as the YSI. So ideally we would like the dots to be clustered around that line. 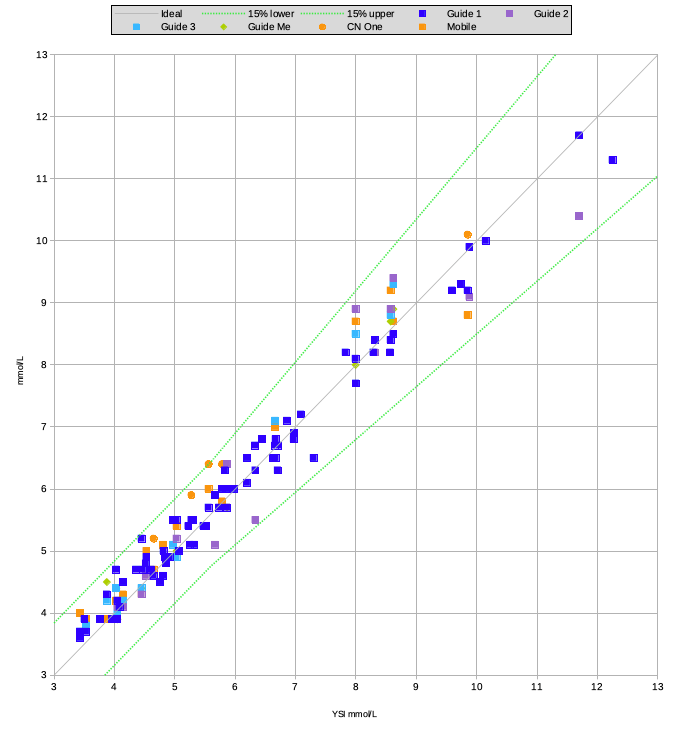 The dark blue squares are the study Guide meter measuring the arterialised venous blood. The other dots are for other meters measuring concurrent capillary (fingerprick) samples. The green lines show the extent of the 15% error allowed by the ISO standard.

Why did I chose 9% for that last column? It was an arbitrary choice getting close to the “8%” that Ascensia has claimed for the Contour Next One.

You can see the Contour Next One data here does not look great, with an average error of 8%. However that was only a very small sample size. I don’t think conclusions can be drawn about the meter’s accuracy based on that sample, but I just include it here for completeness.

Here’s the graph with the green lines moved to 9%: 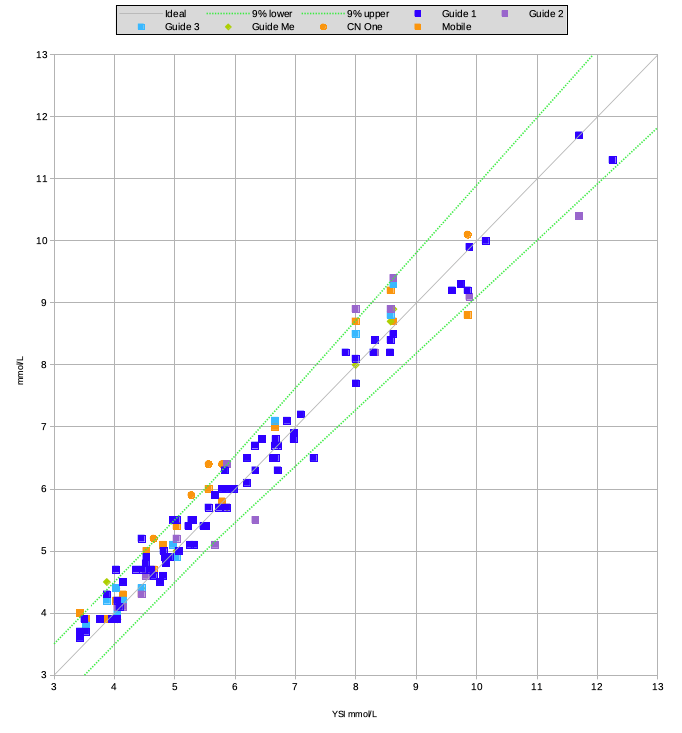 It’s interesting to note that Medtronic has introduced the Accu-Chek Guide Link meter that pairs with their 770G and 780G pumps. The guts of the meter are the same: just some of the Bluetooth connectivity changes.

In fact as I wrote last month there are now three Guide meters, with the other model being the Guide Me. I now have access to three Guides and one Guide Me, and in my cross-testing so far they have been almost indistinguishable in accuracy. Not only does this say something for Accu-Chek’s quality control, it also makes me suspect that the Guide Link is going to be pleasantly accurate.

I’m going to continue using the Accu-Chek Guide meters as my “main drivers” for now. I feel I chose well over four years ago when I started using them.

The analysis and opinions presented in this article are entirely my own work. No company (Accu-Chek or otherwise) has had any input.