This is an overview of Accu-Chek’s BG meter families, but also goes on to introduce some changes for the Australian market.

Accu-Chek have had several distinct “generations” of BG meter technology. In particular (from oldest to newest) the Aviva, Performa, and Guide ranges. Each has been a type of BG test strip, with a series of meters using each. There’s also the Mobile meter, and the Instant family.

I wrote about the Aviva strips back in January. They’re still available.

Although the Aviva Expert meter was discontinued in Australia in late 2019 some are still in use (and I’ve seen some others such as Aviva Connect still in use), and in fact there’s still a current Aviva meter in Australia (the Aviva Solo).

The next generation of Roche strip technology (presumably with improvements in performance/accuracy) the Performa was used in a variety of meters. Such as: Performa (red/white), Performa Nano, Performa II (silver: see this article), Performa Expert (not available in Australia), Performa Combo (handset for the Spirit Combo pump in Australia), as well as 3rd-party systems such as the original handset for the now-defunct Cellnovo pump. There is apparently a Performa Solo somewhere in the world (it’s mentioned on the last box of Performa strips I bought) but I’m not yet sure where.

I think the original Performa meter was replaced by the Performa II partly due to the need to improve the precision to comply with the 15% standard that came into effect in 2016 (the previous standard only required results to be within 20% of the actual value). 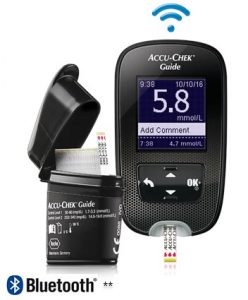 The Accu-Chek Guide has been one of my favourite meters for some years now. It was upgraded recently with a childproof battery door. I have found the accuracy to be better than the Performa, for what it’s worth. But like the earlier generations of Accu-Chek meters, there was never going to be just a single meter in the family.

Back in 2019 I wrote about the Guide Me BG meter, a cut-down version of the Accu-Chek Guide which was being introduced in North America.

Medtronic have also introduced the Accu-Chek Guide Link to connect to their 770G pump (and they’ve finally started being delivered to 770G owners in March 2021). 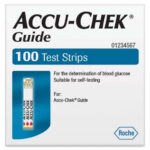 So that’s three members of the Guide family so far. All have Bluetooth connectivity integrated. I won’t be surprised to see more Guides over time. For example just as the handset for the Combo pump exists in both Aviva and Performa versions, I wouldn’t be surprised if the Insight and Solo handsets (currently in Aviva form) arrived somewhere in the world in Guide form at some point.

Those haven’t been Accu-Chek’s only BG meters. The Accu-Chek Mobile takes a cartridge with a spool of 50 tests, and has a FastClix lancer (with rotating drum of 6 lancets) integrated into its side. It measures the test area using infrared light. Through being able to test one-handed, and not having to deal with strip packets or used strips, the original Mobile was the meter that encouraged me to test many times a day, even in pristine environments such as Antarctica.

The original Mobile had an IR port for uploading results to a computer. One annoyance was that due to the meter’s shape it was common for the power button to get accidentally pressed in a pocket/bag. 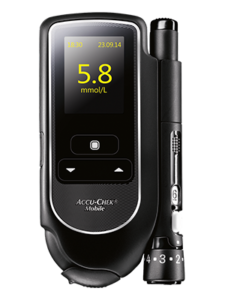 The second-generation (current) Mobile has a flatter front which removes the protuding power-button problem, and has a USB port for uploads. In fact connect it to a computer and it presents itself as a USB drive, with a custom HTML file generated on the fly to report on the results.

There’s also a Bluetooth module available (only in the UK) for the Mobile. Although it makes the meter a bit wider (it plugs into the USB port on the side) it still (just) fits into the meter’s elastic-sided case, and connects to the MySugr app on iOS or Android phones to upload the results.

As long as you use it correctly (including not exposing the test area to direct sunlight during the test, and occasionally cleaning any dust/fluff off the lens that the cartridge sits on top of) I have found the accuracy of the Mobile to be quite acceptable. It’s certainly convenient to use (although it’s slightly larger than the Guide pouch even including lancer and strips).

Several years ago the test cartridge was upgraded with a few tweaks that reduced the frequency of errors (by helping you get the blood drop onto the test area without disturbing the test substrate with your fingertip). 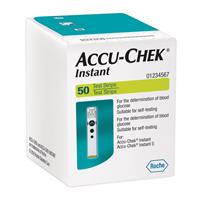 The Instant seems to be very much built to a price, and the Instant strips are not available through NDSS. I’m aware of two meter models.

The white Instant S is a very basic meter, and was initially sold through Woolworths supermarkets, although now is available through pharmacies. If you don’t have access to NDSS test strips (not everyone does) it is attractive because the per-strip cost is a lot cheaper than other meters (although more than the NDSS-subsidised price). Like the Guide, the Instant S did get an upgrade of a childproof battery door.

The Instant (no “S”) is not available in Australia (possibly only the USA) and adds a Bluetooth connection to upload the data to the MySugr app.

My summary of the meter families

Impending retirement of the Performa II

At the end of June 2021 the Performa II will be retired. Of course Performa BG strips will continue to be available through NDSS for many years. Existing Performa II meters won’t need to be replaced, and in fact the Performa Combo handset will still be supplied as part of Combo pump systems.

Arrival of the Guide Me

Yes, the Guide Me has arrived in Australia. It’s a cheaper version of the Guide. To summarise from my earlier article, the main differences being:

Obviously the strips for the Guide Me are already available on NDSS.