As we reported last month, the Cellnovo pump’s handset controller is getting an upgrade. The old Android-based handset included an Accu-Chek Performa BG meter, and was designed by Cellnovo. I say “old”, but it was only introduced into Australia in April 2018. The new handset is a re-packaged phone designed and manufactured by a non-diabetes company, and although it seems as though the Cellnovo application software has been ported over almost unchanged, the handset has many advantages over the previous model.

The device is locked down, and is not useable as a phone. But it’s slimmer than the previous model, and yet has a battery that seems to last for days instead of hours. The screen is brighter, and has a capacitive touchscreen (akin to most modern phones, only requiring light finger taps) instead of the previous model’s resistive touchscreen that required you to physically press on the screen to register a touch. The device is also faster and more responsive.

The device’s SIM slot and communications functions are still used, as Cellnovo fits them with SIMs that work worldwide and feed your data back into their central system. But you still can’t access Android directly: all you get to see is the Cellnovo application.

I saw examples of this new handset at August’s Australasian Diabetes Congress, and was told they were to be rolled out soon. Then last week Cellnovo issued a press release touting the launch of their “Generation 3” product. Apparently the change from “Generation 2” is just the replacement of the handset.

The handset has indeed now started rolling out to Cellnovo users around the world. Mind you, Australian supply is apparently waiting on updated TGA approval. 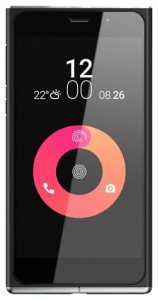 We now know which phone is behind the new handset. The Obi Worldphone SF1. This phone was designed as a low-cost device for markets including Latin America and Asia. The phone was introduced in 2015, and internally runs Android 5.

Interestingly, the Obi Worldphone website seems to have lost its registration, which does raise questions about the current status of the Obi Worldphone company. The SF1 was one of their first products introduced in 2015. It’s not surprising that they might have been able to quickly provide Cellnovo with enough handsets to supply their projected demands.

Knowing what phone has been re-badged might seem like a frivolous piece of trivia, but it can be useful information.

For all those Cellnovo users who rely on this essential piece of equipment to operate their insulin pumps, they can now source a variety of protective cases for them.

For example searching eBay for “obi worldphone sf1” turns up quite a variety of options, including waterproof ones!