An Omnipod can contain between 85-200U of insulin. But the pod is only likely to last 72-80 hours: 3 days plus an 8-hour grace period before shutdown. Ideally we put enough in there to last until we’re ready to replace it: we can’t top it up!

The only way we get to measure how much we put into the pod is to draw that amount up in a syringe before injecting into the pod (in one operation). Once it’s initialised the pod will only report the remaining available insulin once it gets below 50U.

How much insulin should we put in?

Some people extract the unused insulin at the end with a syringe and then top up the syringe with fresh insulin to fill the next pod. But I wouldn’t want to do that too many times in a row, as after a while there’d still be some amount of old insulin floating around (and possibly being a trigger for insulin decay). Back with my old Animas and Medtronic pumps I would top up the reservoirs once or at most twice, but always then discard them.

Whatever I do will be a compromise.

Is this fine-tuning worth it?

For most people this is probably just going too far.

In one scenario the pods are more expensive than the insulin and we care about getting the most time out of each pod (this is probably true for most people in Australia at the moment). In that case we might not care about wasting a bit of left-over insulin.

In another extreme the pods might be fully-funded, and the personal goal might be to economise on insulin use even if we didn’t get the full 80 hours out of each pod.

But I tried an experiment to see how well I could optimise things between those two extremes.

So for the last pod I filled, I estimated that I’d want to put in 125U. As you can see, my attempt worked out fairly well. After eventual deactivation and removal I was able to draw <7U of insulin out of the pod.

But how did I get it that close? 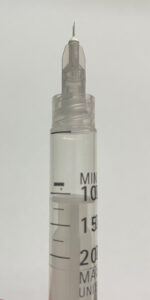 The Omnipod comes with a 2 mL syringe and a tiny needle packaged with the pod. When filling the pod you get no feedback on how much insulin is in the pod (other than the beep as it passes the minimum 80U). So we measure up the volume in the syringe and then inject it into the pod in one operation.

So I could take a stab at going just over the 125 mark. But this time I took a different approach. 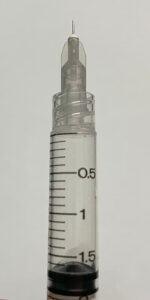 I happen to have these 3 mL syringes. The Omnipod needle has a standard luer-lock attachment, so goes straight onto the top of the syringe. But as you can see in this photo, the markings on the side of the syringe are a little more detailed, with marks at 10U increments.

Each pod comes with one of those 2 mL syringes, so I don’t need to have the 3 mL syringe. There’ll always be a little bit of insulin wastage (including the insulin left behind in the “dead space” at the top of the syringe) with either syringe.

But it’s good to know that I have options.