Having sourced a bit of Lyumjev from overseas, I’ve been able to “give it a run”. In fact I’ve been using it for almost two months now.
My conclusions? As expected, I’m really keen for it to officially arrive in Australia!

I’ve been mentioning Lyumjev for many months, but to recap: it’s Lilly’s faster version of Humalog. Essentially it’s insulin lispro (Humalog) with the addition of an accelerant. Similar to how Fiasp is accelerated insulin aspart (NovoRapid) although the accelerant is quite different. The name surprises many people (I sometimes refer to it as “the IKEA insulin”).

Because people always ask an obvious question, I should give the answers pre-emptively:

No, Lyumjev is not available on Australia’s PBS yet.
It is not even approved by the TGA (and thus Lilly can’t even talk about it in Australia).

Hopefully the wheels are turning in the background, but we won’t know anything about it until a TGA approval is granted.

We hear about Lyumjev a lot from people in Europe and the US, but I wanted to see for myself. Luckily it’s legal to import many things for your own use. However it’s very expensive to organise it including safe shipping, so it’s not an arrangement I can see myself continuing with for the long term.

Not everything works smoothly: “side-reactions”?

Many people unfortunately have reactions to Fiasp: the nicotinamide accelerant seems to result in stinging and inflammation for some people. I’ve written about this in the past. Some people work around this by reducing the accelerant concentration by mixing Fiasp with NovoRapid (e.g. in the pump reservoir). There’s still enough accelerant to make it work fast (the theory being essentially that Novo erred on the side of oversupply to ensure it worked).

I did something similar for several months when I started using Fiasp as I wanted to avoid that reaction. When I eventually switched to 100% Fiasp I didn’t have any reactions. I don’t know if that’s because I was never going to, or whether my use of lower concentrations had acclimatised my body to it.

Similarly, some people find they have reactions to Lyumjev. Again, stinging and in some cases inflammation. In fact the primary accelerant in Lyumjev (a tiny amount of trepostinil: a vasodilator) is also used in some other therapies, and anecdotal evidence from there says that many people have similar reactions to it which can take months (with continual use) to subside.

But like Humalog, Lyumjev comes in two concentrations: U100 for injections and pump use, and U200 in pens for injection (to accommodate people who have to use larger doses). Interestingly both forms have the same concentration of accelerant by volume, so for the same dose you’re injecting half the accelerant with the U200 form. Reports of stinging with the U200 form are very rare.

Apart from the accelerant, Lyumjev and Humalog seem the same: even the insulin molecules (“insulin lispro”) are identical. So I have been taking advantage of this: filling my pump reservoirs slightly more than half with Lyumjev, then topping up with Humalog. This reduces the accelerant concentration by volume and by unit of insulin. I’m still calling this “Lyumjev”, although in reality it’s slightly modified.

I have not noticed any stinging with Lyumjev, and as I get towards the end of my supply I plan to switch to using 100% Lyumjev and checking if I notice any stinging. And if it changes the action profile at all. But in the meantime I’m also getting the advantage of stretching out my supply!

I’ve previously shown Lyumjev’s expected action profile on the graphs resulting from my earlier experiments with NovoRapid, Humalog, and Fiasp. The earlier peak really promised advantages of faster response for closed-loop operations. After some actual experience with the insulin I’ve settled on an insulin action profile which seems to describe the activity of Lyumjev well. It’s subtly different from those earlier graphs, but it’s less guesswork and wishful thinking: this is actually working for me.

I’ve shown graphs like this before, but this is another take on explaining the differences between the insulins. The exponential models I’m using are generated by the formulas used in OpenAPS and AndroidAPS.

I’ll start by showing the exponential decay curve that we use to model how Humalog gets used up in our bodies over time. 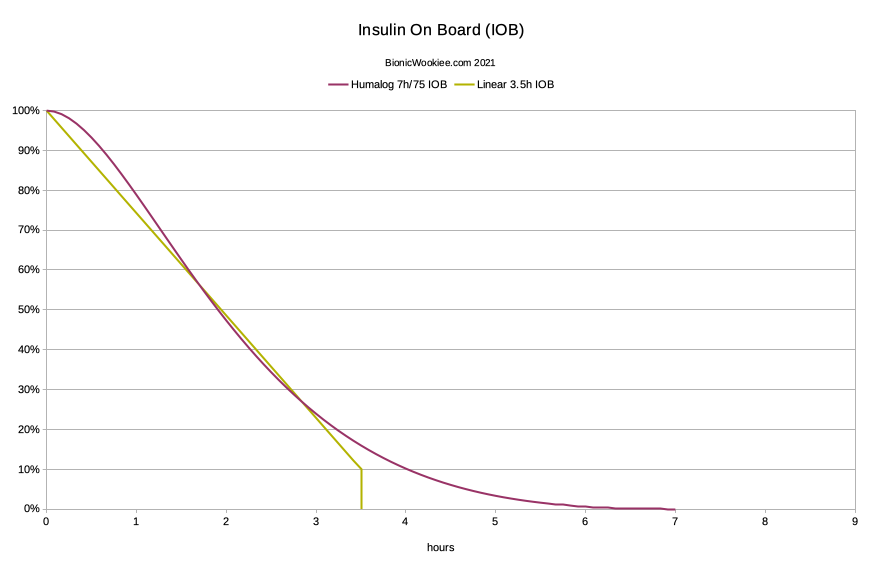 That’s a 7-hour duration for Humalog. But as you can see it’s approximated for at least part of it by a linear-decay 3.5-hour duration. Such linear models like this (stopping when the insulin level reaches 10%) have been quite traditional in pump bolus calculators. They don’t bother dealing with “the long tail” of insulin activity, as the assumption was that it was at an insignificant level.

However in looping we don’t just use this calculation for a few simple meal/correction boluses in the day, but in fact for every dose of insulin the pump gives us. So the tails of those hundreds of doses can in fact add up to significant levels. So we use a longer duration such as 7 hours, even though people who are only used to the old pump calculators are sometimes alarmed by that number: they’re more used to seeing numbers like 4.

7 hours is what I’ve found works well for me with Humalog and for Lyumjev, although NovoRapid and Fiasp both work well with 9 hours. Here are the IOB graphs for all those insulins, using the timings that I have settled on in my own 2021 experiments. 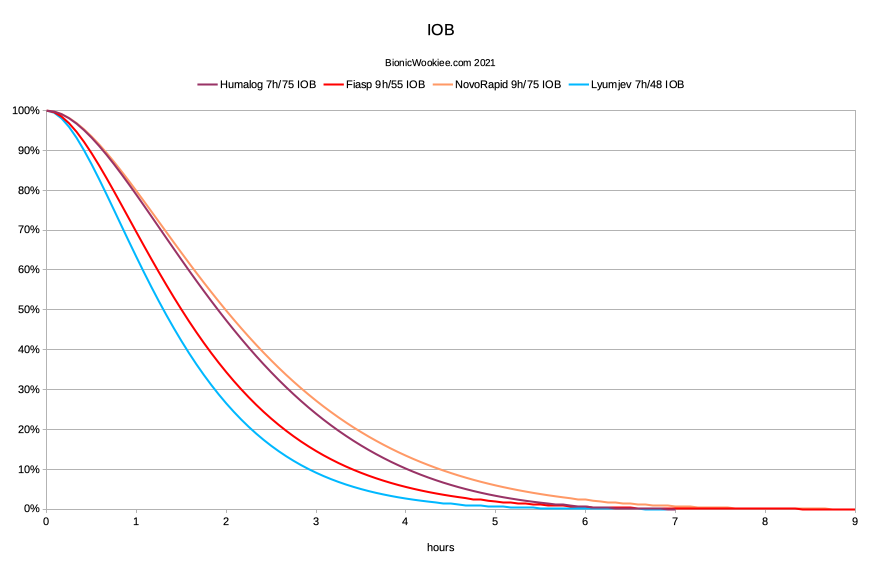 Immediately you can see how Fiasp (the red line) drops away faster than NovoRapid or even Humalog, and the blue Lyumjev line drops away even faster still. This is obviously because the insulin is getting used up (is having effect) faster, but just the IOB level itself is important.

In preparation for significant exercise I tend to use an “activity temp target” to tell the loop system to raise my BG before the exercise. Minimising the amount of insulin floating around in my system minimises the muscles’ habit of sucking up insulin and glucose from the blood and causing hypos. For example if I get the IOB level low enough I can often ride my bike for hours without significant drop in my BG. And I ride fairly hard!

This drop in IOB doesn’t happen instantly of course, so I set the activity TT at least an hour before I head off. Sometimes longer if I can. This has been an important tool over the last few years with other insulins.

Looking at the above graph, the faster decay means that after one hour there’s 69% as much Fiasp left as there would be NovoRapid.

This faster drop-off of insulin pre-exercise is certainly convenient, but it also comes into play during normal life. Each dose drops away more quickly, giving the system more flexibility to dose insulin only when it’s required. It’s still not instantaneous, but the “faster-off” of Lyumjev is definitely advantageous!

The inverse of IOB would be “insulin used”: insulin which has been dosed and used up. 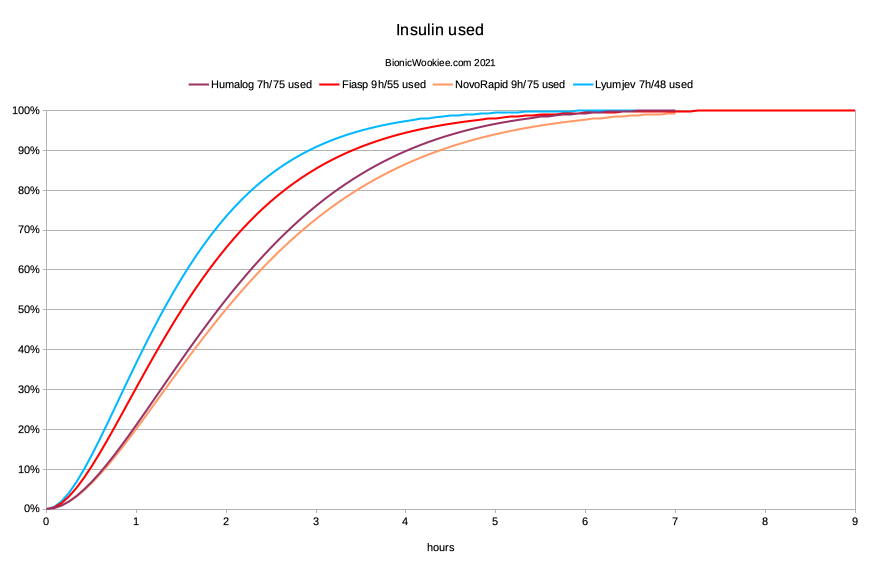 It’s easy to see that the faster insulins are used up faster. In fact I find the amount used by 2 hours is an approximate indication of how much I have to scale the insulin sensitivity factor (ISF) by for each of these insulins.

It’s the slope (angle) of those graphs that tells us a lot about how fast each insulin is. Here is that in a graph (including the simple constant-action assumption of the old pump bolus calculators). 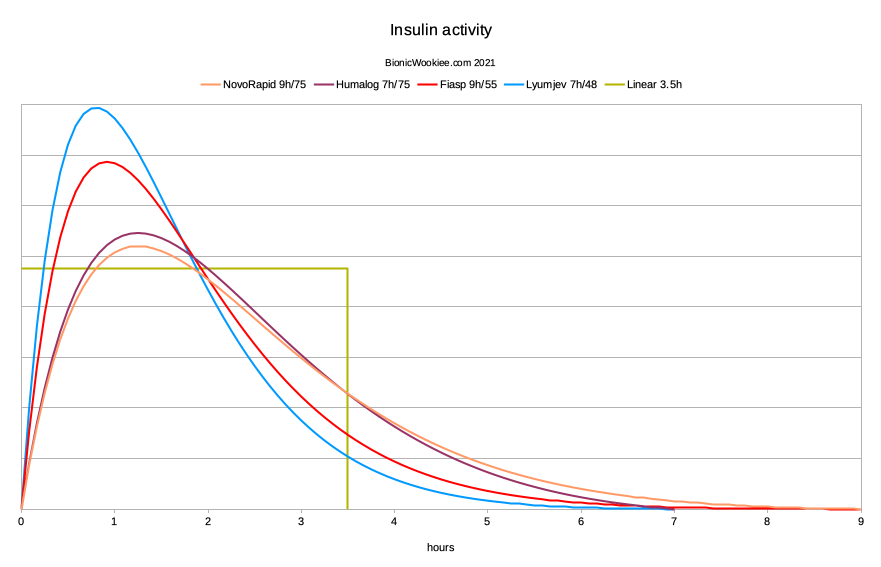 The higher the line here, the steeper the change in IOB. And the stronger the instantaneous effect on our BG.

There are two variables used to define these insulin profiles: the time of the peak action (seen on the activity graph) and the duration (the length of that tail).

If you compare the NovoRapid and Humalog lines I use above, they both have a peak at 75 minutes. But the NovoRapid seems to hang around longer: as a result the peak at 75 minutes is a little lower. By comparing the calculated graphs with my observations of insulin activity throughout the days, over a while I’ve settled on these numbers. Back in September when I last dealt with “comparing insulins” the Lyumjev numbers were a guess, but now with some experience under my belt these are my current favourites:

As you can see, I’ve ended up with the same duration for both “insulin aspart” insulins (9 hours), and for both “insulin lispro” insulins (7 hours). But the accelerants bring the peak times down a lot.
Incidentally 9 hours is usable in AndroidAPS without changing code, simply by declaring that you’re pregnant (which changes many of the safety constraints).

The observant reader may notice that my Lyumjev peak time of 48 minutes is different to the peak time of 45 minutes that’s used for Lyumjev by default in AndroidAPS. I started off with 45 minutes, but things weren’t lining up even with different durations. Until I moved the peak time. To show the differences here it is in graph form. 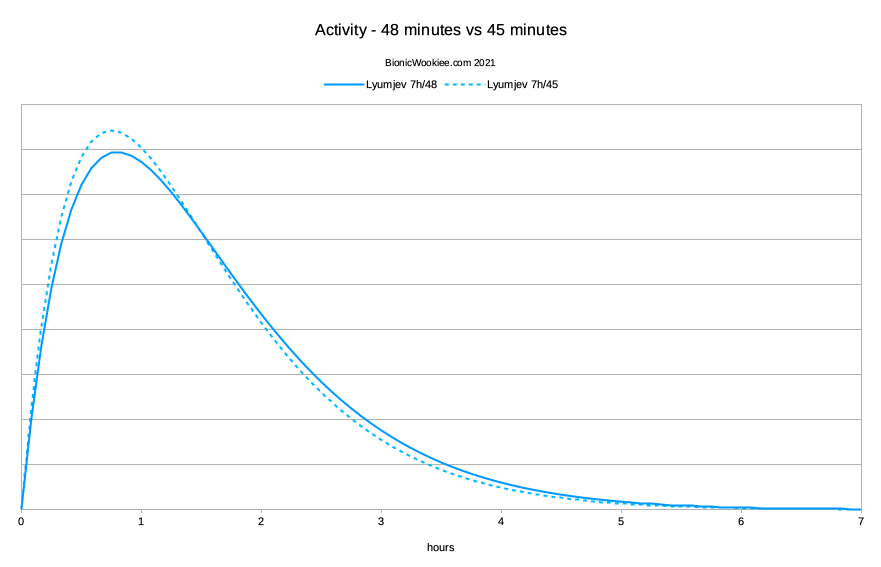 The subtle change in peak time spreads the action out across the entire timeline. So at one level this is saying that I find the peak of Lyumjev action is slightly lower than many people use in their own setups. But the result is:

Of course I am using Lyumjev with a reduced concentration of accelerant, which might account for this change. Or it’s possible that the 45 minute number has just been an approximation.
I’ll double-check later if this profile also works for 100% Lyumjev.

So where does all that leave my experience of Lyumjev?

In short, I’m loving it!

Keep in mind this is with my continued no-bolus, no-announce fully-closed loop. And including Christmas!

I’m reminded of what I wrote back in April about Living with an actual closed loop when I quoted Arthur C. Clarke. It really feels like magic!

Any sufficiently advanced technology is indistinguishable from magic.

I am of course continuing to tune my loop configuration, and the faster IOB decay may be opening up some interesting observations for all insulins (just as with the way I think observations with Fiasp ended up helping tune things for Humalog/etc). Those things will develop over the coming months.

No. I’ve hopefully shown previously that great results can be achieved with Fiasp. Even Humalog and NovoRapid can work, although I get much better results with those if I put the effort in to count and announce carbs, bolus manually, etc.

But is Lyumjev advantageous? Definitely!

Back in 2017 when Fiasp was approved by the TGA I dreamt of what a closed-loop system could do for me, and realised I needed to start. I built an OpenAPS system using Humalog, and my glucose management and health immediately improved. Two years later when we got access to Fiasp through PBS things improved further, although it took me a while to keep tuning things and getting towards a fully closed system. I did get to a great place with Fiasp.

But Lyumjev has allowed the system to advance even further.

With Lyumjev I feel like I’ve now actually managed to reach the management I was dreaming of five years ago!

My little stash of Lyumjev isn’t going to last forever of course. When I have to I can go back to Fiasp. Based on previous experience my Fiasp setup would probably benefit from the tuning I’ve been doing with Lyumjev, but I’m hoping we get regular access to Lyumjev in Australia sooner rather than later!