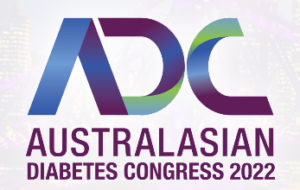 The 3-day Australasian Diabetes Congress was an interesting experience for me, with ups and downs.

As the first in-person Congress since 2019, with around 1600 delegates (mainly doctors, researchers, and diabetes educators) in attendance, it was interesting to be back amongst the crowds again.

Day 1 involved a lot for me. As well as watching presentations, talking to vendors in the exhibition hall, and networking with lots of HCPs (and fellow PWDs, and exhibitors), I had some official jobs to do.

There were lots of exhibitors in attendance. Both commercial vendors, and patient support organisations. As usual, large prominent stands by the pharmaceutical companies, with lots of smaller booths around the periphery.

I’ve got some notes about industry news later on in this article.

The hall was also where lunches/etc were served during the congress, along with the networking reception on day 1. e-posters were also on display at the rear, 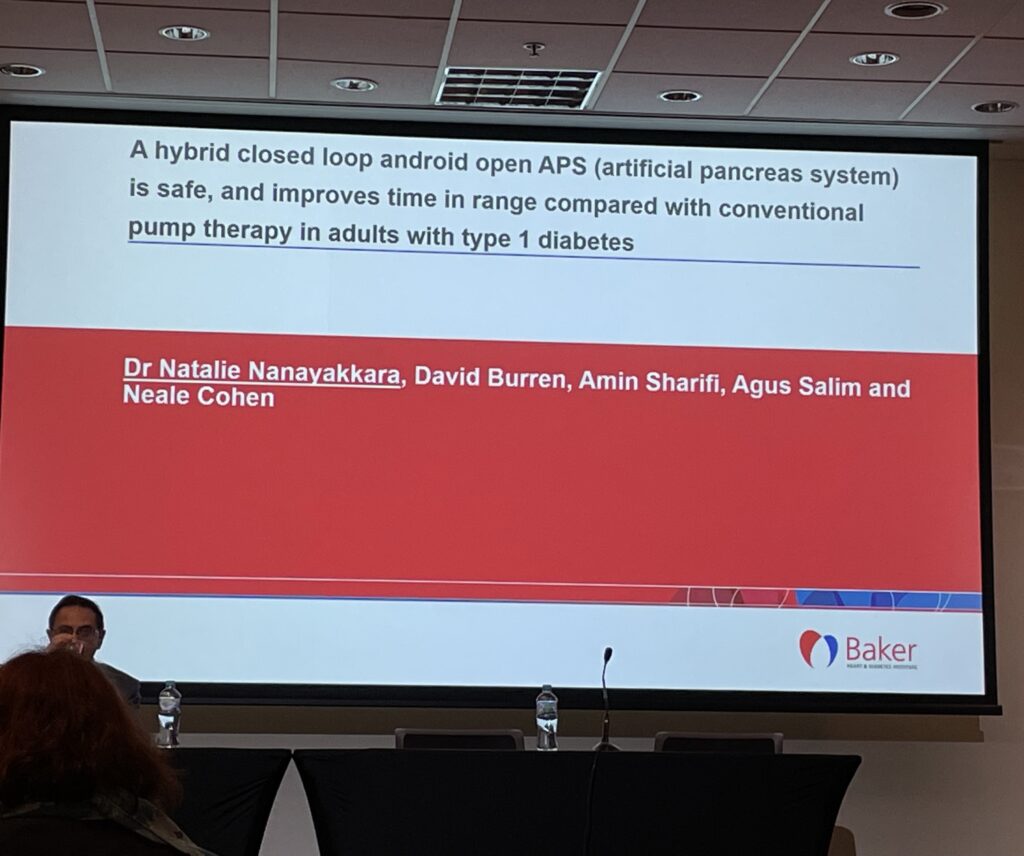 I got to sit in the audience as the results of our randomised control trial (RCT) of AndroidAPS at the Baker Heart & Diabetes Institute were presented. Part of the reason I was there was to be able to answer any tricky technical questions that might come from the audience.

The trial compared people using traditional insulin pump therapy and using AndroidAPS. The study was designed to mainly study the safety of the system, with efficacy as a secondary outcome. Every participant did both arms, but they were randomised to different orders. The AndroidAPS configuration was fairly basic (not using SMBs).

The TIR (in AAPS) for people who’d done the “plain pumping” first averaged 76.6%, and 73.9% for those who started on AAPS first. But the difference was not noted as clinically significant.

Notably there were no serious adverse events in the trial!

Along with the recent results from the larger CREATE trial in NZ, this is adding to the evidence of the safety of oref1-based AID systems, and I’m looking forward to the next sets of results!

This didn’t come up in the discussion, but the trial has also provided me with a wonderful opportunity to work with the YpsoPumps. I was the person who wrote the software driver to interface with the research YpsoPump OPN pumps, as well as being the technical expert on the team regarding the use and configuration of AndroidAPS. There’ll be further work required to talk to the newest production YpsoPumps, but that’s something I’m looking forward to.

Then once questions had finished (yes I did have to take the microphone briefly) I had to race off to a concurrent symposium I was speaking in!

This symposium was full of presentations from people living with diabetes, talking about their lived experiences and activities in advocating for those of us who live with diabetes.

A strong message through several of the presentations is that mental health is all too often overlooked, and that clinicians should get into the habit of asking “How’s your head?” (or similar) and then waiting. Don’t fill the silence after the question. 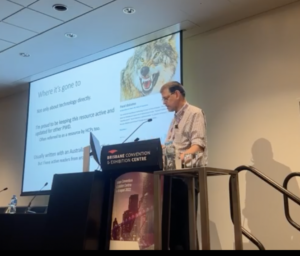 My own presentation was the last in the session. We were running late by then, but I did get to briefly speak about the work I’ve done operating the BionicWookiee site. I’m proud that it’s often referred to and recommended as a useful resource by both people living with diabetes and by the HCPs they see! 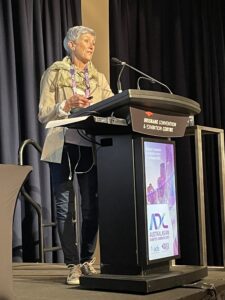 In the next session I wasn’t a speaker, I was co-chair of this symposium. We had speakers on exercise management with Medtronic closed-loop systems, on titrating insulin doses after betamethasone administration during pregnancy (using Basal-IQ to maintain safety), on the use of CGM data when working with patients using CGM/Flash, and on the use of a opensource loop.

The last speaker was the wonderful Alison Twemlow who reported on her experiences with AndroidAPS having been diagnosed with Type 1 Diabetes in her 60s. 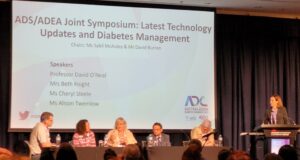 At the end we had a Q&A session, and my co-chair and I decided I should sit in on the end of the panel to address the technical questions that were sure to come up.

On the stage we actually had three “loopers”, but there were a few points where people referred questions to me after all.

Day 2 had a depressing start. Although I had been studiously wearing masks since I left home days earlier (except for when eating/drinking or away from others and speaking into a microphone) and doing a rapid antigen test every morning, suddenly I had a positive RAT result!

I’ll make it back home once I’m cleared after isolation. So that put paid to the rest of my in-person attendance for the rest of the conference! I’ve been dependent on reporting from my #DAPeoplesVoice peers. Except for part of….

Ypsomed funded a breakfast on the last day, where the Baker team got to talk about their experiences with AndroidAPS during the clinical trial introduced above. Of course, the trial used the standard YpsoPump (for the non-looping arm) and the YpsoPump OPN for the AndroidAPS arm of the trial. But the trial was not studying the YpsoPump OPN itself. The primary and secondary outcomes of the trial were regarding the safety and efficacy of AndroidAPS and the oref1 algorithm.

I had originally been scheduled to stand up and present on technical aspects of the algorithm. But with COVID that wasn’t to be. In the end I was still able to present, just via Zoom from my hotel room several blocks away! I tried to present an overview of the fundamental differences between AndroidAPS/oref1 and the commercial AID systems that clinicians may have been more familiar with. As you see in this photo I did of course throw some Star Wars references in to the presentation…

After me we had a discussion with Erin Boyle giving her impressions as a user of the system. Erin has used both Loop and AndroidAPS, but since the trial has for now settled on using AndroidAPS.

It was a little hard to tell from afar, but by all reports I’ve heard the presentations were received well overall! Thank you to Ypsomed for their support!

Representation at the congress

Overall I’m happy we’ve been able to keep the experiences of us actual people with diabetes prominent in the congress. Thank you to Diabetes Australia for their support in this too. #NothingAboutUsWithoutUs!

I also hope we’ve been able to present opensource loop/AID system as real options in the landscape of diabetes, and not just the work of “crackpots”. Certainly all the feedback I’ve received has been positive.

There weren’t really many major announcements or product launches manufacturers this year.

The pods are still unsubsidised, so we’re still waiting for any developments on that front. It does seem that the current Federal Health Minister (Mark Butler) has made statements similar to the previous incumbent (Greg Hunt). That they believe these devices should be funded (and this set direction to the Health Department to try to find a solution). So it’s encouraging that the issue hasn’t been lost in the election aftermath.

The pods are positioned as consumables, so there can’t be any development with them being listed on the Prostheses List. So the current infrastructure they would have to fit within is the NDSS funding of pump consumables. How that might happen remains to be seen. 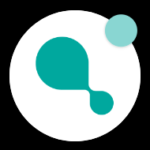 I referred recently to developments with CamAPS, and wondered if there would be any announcements at the Congress. In the end no, but I do have some further information.

There can be 3 components to the new YpsoPump system:

I believe the upgraded MyLife is for both iOS and Android, contains the G6 support of the current Android version, but with better integration with Dexcom servers, and can talk to both the current and updated pumps (with remote bolus to the new pumps). It may be available overseas already, but unfortunately I think it’s waiting on TGA sign-off for Australia. But CamAPS and the pump itself are already sorted.

In the meantime they’re doing a “soft launch” where they’ve engaged with a small number of endos around the country who will be starting some patients on CamAPS FX.

As they move out of that phase they’ve indicated they’re going to be concentrating on upgrading existing customers’ pumps as a priority before anything else. The timeframe of the TGA stuff (and thus the detail of the next phases) is unpredictable though.