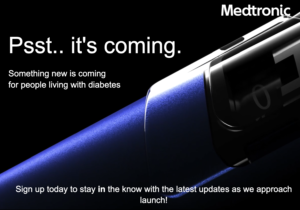 Medtronic Australasia have this week been sending out teaser emails about “new technology” coming. They have a web page where you can register to be kept informed.

From the graphics we can see, it’s fairly obviously the InPen, which was initially introduced in the US by Companion Medical, who were then bought by Medtronic. Medtronic got Australian TGA approval for it in August 2021. 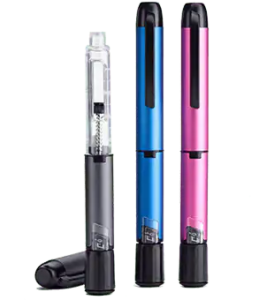 It’s a Bluetooth-connected “smart” insulin pen that’s paired with a phone app that calculates and tracks your insulin doses. It can deliver in 0.5 U increments.

These are not disposable pens: like the HumaPens and NovoPens, they take standard insulin cartridges. And standard needles.

In the US at least, there are two models of InPen, with cartridge holders for either Humalog cartridges and for Novo PenFill cartridges. Their app supports Humalog, NovoRapid, and Fiasp.

Mind you, as we know Fiasp PenFill cartridges are not available in Australia. Unless you convert FlexTouch pens by yourself, although that’s obviously “off-label” use.

The app tracks long-acting insulin injections, but not using the InPen.

It will integrate with the Medtronic Guardian Connect CGM, and if you’re using an iPhone then it can instead retrieve BG data from the phone’s Apple Health database. This can be populated by apps including MySugr (Accu-Chek meters) and Contour (Contour Next meters).

Note that although the Dexcom G6 app will put data into Apple Health, that gets delayed by several hours due to regulator (e.g. FDA) imposed restrictions.

The above info is derived from the US application of the pen. We’ll have to wait and see if there are changes in the feature set they eventually (soon?) introduce in Australia.

It will also be interesting to see how they arrange costs/funding for these pens. In the US like everything else it’s done via insurance. Note that the battery in the pen is not user-replaceable.

For the (US-specific!) info about the InPen, it is possible to read more info at Medtronic’s US site.

3 thoughts on “Medtronic tease the InPen”