Insulin pumps are devices we continually wear, continuously administering a life-saving drug. Too little or too much, and our lives are in danger. So we need them to be reliable. So what happens if they get wet? What does it actually mean if our pump has been described as “waterproof”? And what can we do if it isn’t? 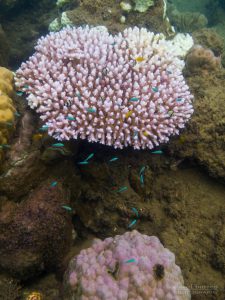 You might not be venturing out on an Antarctic expedition at sea or snorkelling in the tropics, but even if you live in the deserts of central Australia, you’ll probably at some point need to deal with this issue.

One common standard is the use of “IP codes”. These codes are defined in an IEC standard, and are generally used to classify the dust and water-resistance of a device. After the letters IP, the first digit specifies the dust protection (or “X” if not specified) and the second indicates the water protection. As you’ll see however, the standard allows a lot of variation within each rating.

A rating of “IPX8” basically means that the device has been tested and found to be safe for at least 30 minutes in at least 1 m (probably 3 m) of water. It could mean it passed more-stringent tests, but it’s not always apparent exactly what the parameters were. Also note that these tests are generally done in fresh water. Additives in the water (e.g. sea salt, soap) could change the results of the test!

Other “waterproof” ratings exist, such as “5 ATM” (for water pressure equivalent to 5 “atmospheres”) or “10m” (a fairly obvious 10 m depth rating). Be aware though that if you’re doing to dive into water and end up at 3 m depth, the pressure impact as you enter the water can be much higher than the pressure at 3 m, so generally swimmers go for watches with ratings on the high side just to be safe. But insulin pumps are generally described with the “IP” system. 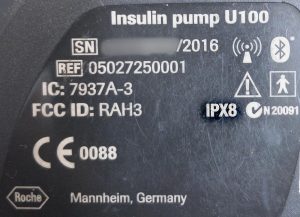 The Spirit Combo has an IPX8 rating.
Mind you, Roche’s advice is quite conservative. They’re obviously playing it safe.

From the pump manual: 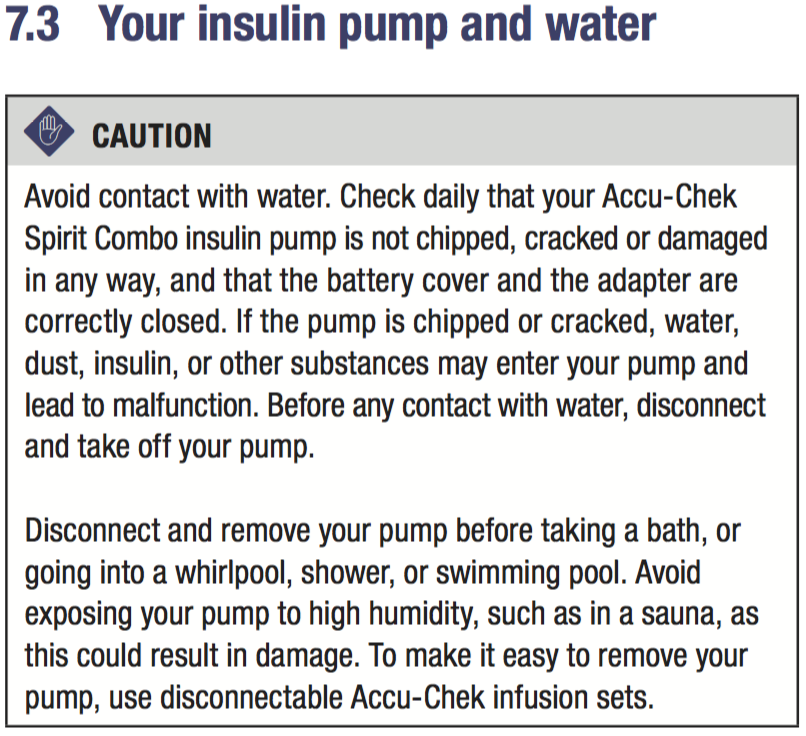 The “battery cover” and the “adapter” (which covers the end of the insulin reservoir and has the luer-lock connector for the infusion set) have O-rings and waterproof seals/valves. Roche advises that you replace these regularly to maintain the pump (and in fact supply replacements every 2 months during the pump’s 4-year warranty period).

I know many people are surprised when they see that advice to remove your “waterproof” pump before going into water or high humidity. But the IPX8 rating is not a guarantee that the pump will resist everything, and they’re obviously playing it safe with these devices that we rely on to survive.

Mind you, I have heard from Spirit Combo users who for years have been regularly wearing the pump while swimming, with no ill-effects so far.

My own position with this pump is that as long as I regularly inspect the seals on the battery cover and adapter (whenever changing battery or reservoir) and keep them replaced with fresh ones, and as long as I don’t drop my pump (although it does live in a case with a little bit of padding) then I should be safe.

I will continue to remove the pump for a while if I’m going to be swimming/snorkeling, but I’ll keep it on if I’m sailing a boat or otherwise working around water. If I do end up going into the water it should be safe, but I don’t plan on making a habit of that. 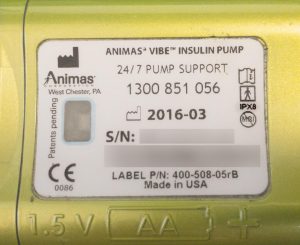 I used one of these pumps for many years. The Vibe also has an IPX8 rating, apparently tested to a depth of 12 feet (3.6 m) for 24 hours.

Animas wasn’t quite as conservative in their advice as Roche:

Again there are recommendations in the manual to regularly replace the battery and reservoir caps. Generally every 6 months, although it does suggest that frequent swimmers should replace every 3 months. Over-tightening the caps could stress the case, and some pumps had to get replaced because they cracked near the cap. Whether this was always due to over-tightening was unclear, but again regular inspection of your pump is important.

I always treated my Animas 2020 and Vibe pumps in the same way I’ve described above that I will treat my Spirit Combo.

Always check your gear without just assuming that it’s waterproof!

What do I do if my insulin pump is NOT waterproof?

This is an issue for many people who are forced to use older Medtronic 5xx/7xx pumps in order to run DIY closed-loop systems. Those pumps were rated as IPX7 when they were manufactured, but these pumps are getting old and no-one really trusts them under water, even at less than a metre’s depth. I’ve seen old Medtronic Paradigm pumps with corrosion around some of the buttons, and the suspected culprit is that those particular pumps were often worn by women in their bras, and exposed over the years to a lot of perspiration. A common tweak is to cover the pump with clear packing tape (which improves the water resistance of the pump’s buttons) but that’s just a layer of insurance, not a guarantee.

But there is another useful tool available: a waterproof pouch to put the pump into. Not so useful for putting the pump into your bra, but definitely useful at the beach. 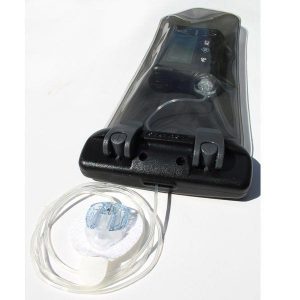 AquaPac (a UK manufacturer of water-resistant equipment cases) market a case specifically as their insulin pump case. I first encountered AquaPac in the context of underwater cases for camera equipment.

In Australia most AquaPac distributors don’t carry this product, but it can be bought through OneAnd2 for AU$60.

The case is soft and pliable, and just large enough to slide a pump into, and the clamp at the end of the case closes neatly around the tubing to the infusion set. It has an interlocking mechanism which means it’s not likely to come undone by itself. You can read the LCD and operate the pump controls through the clear side of the case.

I purchased one of these cases last year as insurance for when using an older Medtronic Paradigm pump around water. It happens to also has enough room to protect a RileyLink or small OpenAPS rig (hardware used for DIY closed-loop systems with those older pumps). Just slide the rig or RileyLink in first and then the pump, seal it up, and it’s safe to go. Personally I take one extra step (outlined below).

Of course, there’s still a risk your precious equipment will be damaged by water. If you haven’t sealed the clamp properly (e.g. there was a hair or some dust across the seal when you closed it up) then the first you may know about it is when the pump stops working or you see water sloshing around inside. 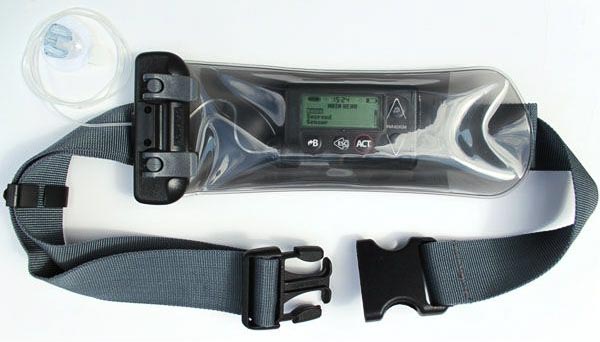 This is always an issue with waterproof cases for cameras too. Even with the big professional housings, it’s essential to check the seals each time you use them, or $20,000+ of camera equipment could die.

This case is made of soft TPU material, and won’t be robust against continual wear and tear, especially if you don’t treat it kindly. For me it’s only something for occasional use (e.g. if I’m going to be working around water with one of the older pumps) and not something to use all the time.

And it’s just an added layer of water protection, not a guarantee. Do not become complacent!

My biggest tip when using the AquaPac Insulin Pump case (especially when putting sensitive electronics in there too) is to take an absorbent cloth such as a microfibre cleaning towel, cut it to size, and slide that into the case along with the gear you’re protecting. It becomes an absorbent layer behind the equipment. When a leak does develop at some point in the future, the material should quickly absorb it before the water dribbles along to a sensitive piece of equipment. You can’t fit much material in there beside the pump, but just one layer can absorb a lot of water.  Tricks like that have saved many cameras in the past.

So is it safe?

To summarise, if you’re going to use your essential-for-life technology around or in water, be very clear what it is designed for. Read the product’s manual, and/or ask the manufacturer’s support team for advice.

And remember that there are no guarantees. All you can do is reduce your risk. Living with diabetes involves a lot of risk-management, and this is no different.

5 thoughts on “Is your insulin pump waterproof? What does that actually mean?”