What’s a quinquennial? A 5-year anniversary. Yes, it was a whole 5 years ago I finally set up my “DIY” closed-loop.

I’m obviously still using it, although there’ve been lots of changes along the way. Both in terms of improvements in clinical results and in terms of quality of life.

What’s changed in the technology?

I started out with OpenAPS, running on a pocket “Edison” Linux computer and driving a Medtronic Paradigm 522 insulin pump. My CGM was using Libre1 sensors, managed by an Android phone (connected to the Edison via Bluetooth).

Along the way the CGMs I’ve used have included Libre1 and Libre2, Dexcom G5 and G6, and even PocTech and Medtronic systems! G6 is my current stable base.

I’ve used quite a few pumps, but today I mostly use YpsoPump and Omnipod DASH pumps. These are small and compact devices. I’ve been very lucky to work with the OPN clinical-trial versions of the YpsoPump.

The device that controls it all has shrunk too. 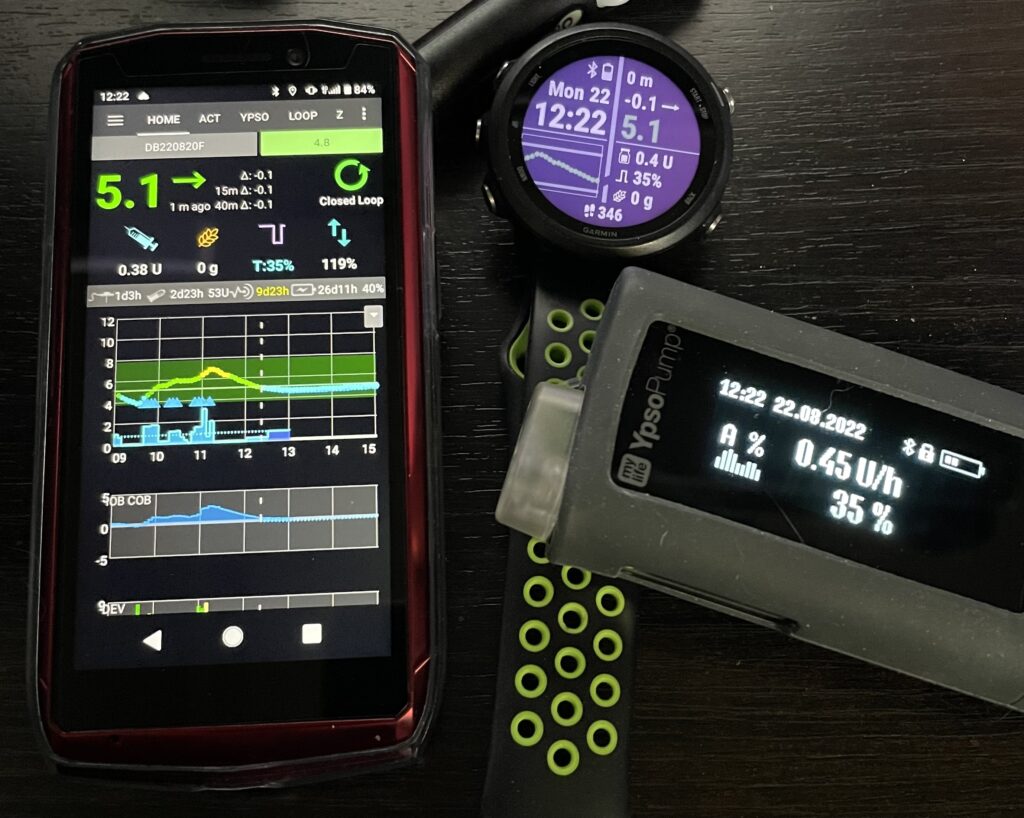 Today the controller I’m using is a Cubot Pocket phone. An Android 11 device with a 4″ screen, enough battery to last almost 2 days between charges, and excellent Bluetooth connectivity. It’s a shame it’s not rugged/waterproof too (although if I’m heading off for watersports I can switch to other devices which are). It’s linked to my Garmin Forerunner watch, which I find a useful tool in managing my exercise.

The software I’m usually running is very similar to AndroidAPS. It’s something we’ve instrumented with extra controls for use in clinical trials, but pretty much everything I’m using exists in AndroidAPS. In fact the underlying algorithm is the same as OpenAPS.

Why use opensource AID systems?

When I started out there were no commercial AID choices. Today in Australia we have Tandem’s Control-IQ, Medtronic’s 2nd-generation 780G, and Ypsomed’s CamAPS is being introduced. So I’ve occasionally been asked:

“With commercial systems available, why would anyone use ‘DIY’ systems?”

The answers will of course vary for each of us, but several responses immediately spring to my mind:

In short the commercial systems may be improving, but so are the opensource systems!

The “diabetic life” after 5 years of looping

Indeed, after almost 40 years of living with T1D.

No commercial system claims to support the functionality I’ve had with my own loop for several years now:

I just glance at my watch every now and then to see how it’s going, and get back on with living life. Occasionally I adjust settings when I notice patterns changing, and I do replace CGM sensors and pump reservoirs/infusion sets when needed. But diabetes does not feel like a day-to-day burden.

And yet my clinical results are not terrible either.

I know I could get even “better” results if I put in more work day-to-day, but for now I’m more than happy with this compromise.

Some users of opensource AID systems (e.g. Loop on iPhones) say to me that they’re not interested in the commercial systems because with those they can’t bolus from their watch. In response I think “You have to bolus???”. I can with the system I use, but I don’t have to.
Everyone’s expectations are based on their experiences.

I can’t see the opensource systems going away any time soon, and I can only try to imagine what features we’ll have access to in another 5 years!