Back in 2017 I wrote about streamlining the process of inserting a new pump infusion site, and last night it paid off again! For a long time when I insert a new cannula I’ve left the old one in place for a few hours, until I’m sure the new one is working properly.

Sometimes a site ends up being blocked or painful, and we have to remove it and insert a replacement. This can be very intrusive, and at times the hassle (and face it: cost) of inserting a new cannula can mean we delay trying it until we’re really sure the site is faulty. As a result it’s not unusual to end up with a period of high BG levels. Anything I can do to streamline that issue has to be a bonus.

Woken up in the middle of the night

At about 2 AM this morning I was woken by alarms from my pump. There’s a standard button sequence on the pump to acknowledge cancel alarms, and in my sleepy state I tried to do that. It was hard in the dark to see what the error message was, but my first instinct was to silence the alarm to let my wife keep sleeping. But the error soon recurred.

Late last night before I went to bed I had realised I was overdue to replace the cannula (it had been in for 3 days) and so I inserted a new cannula before I headed to sleep. But I had left the old cannula in beside it (without tubing attached) with the plan to remove it in the morning. I’m very glad I did!

It turns out the Combo pump was reporting E4: OCCLUSION. There was a problem with the reservoir, tubing, or infusion site (cannula). As soon as I realised, my path was clear. I unclipped the tubing from the new site and reattached it to the old cannula (from which I had detached some hours earlier) and put the pump back into RUN mode.

The loop algorithm had been trying to feed me insulin but my levels were remaining up above 7.5 mmol/l (at that time of night I have my system configured to aim at 5.5 mmol/l). It had been floating along at that level for over an hour without dropping, and I considered whether the system thought I had received insulin that hadn’t actually happened and thus would take a while to recover, but as it wasn’t a situation like a ripped-out site dribbling insulin into the bed I decided to just go back to sleep and find out later how the system coped. 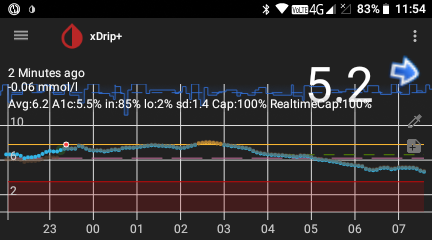 In the end I woke up with my BG stable at 5.1 mmol/l. I had risen to 8.1 but then the insulin was kicking in and the loop brought me back to target. As soon as I saw that I pulled off the failed site, and got up to feed the animals. Incidentally, I could not see any sign of “kinking” or other cannula faults: it just hadn’t been reliable.

At this point I was running off a cannula that was ~3.5 days old. Not terrible, but I knew I really should change it soon. So before breakfast I inserted another cannula and switched to that.

By late morning when I could see that insulin was flowing properly and my breakfast had been dealt with, I knew it was safe to finally remove the old cannula.

I’ve been using this technique (dual cannulae) for a long time, without having to use it for over a year. In fact, this was the first time I’ve had occlusion alarms with this pump. The only times I haven’t left the old cannula in for a while have been when:

But it had been so long since I had encountered a bad infusion site, I must admit that recently I considered streamlining things and removing the old site as soon as I changed to the new one. But I’m glad I didn’t give in to that temptation!

Some people approach the issue of dealing with failed new infusion sites by never changing in the evening before they go to bed so that they’re awake and able to monitor and deal with it if the site fails during the day. But I’m not necessarily monitoring my BG levels any more closely during the day than when I’m asleep! I have a busy life, and can’t just sit around watching my levels.

Some people keep injection paraphernalia on hand so they can inject a correction dose while they’re dealing with the failed site, but I only had to reconnect to the old cannula.

Yes I was disrupted at an inconvenient time by my technology, but having the old cannula still in let me quickly recover, and still end up with a good night’s sleep. Of course, the closed-loop system helped with that too (but I learnt to use dual cannulae before I started looping).

3 thoughts on “Saved by the old cannula”