In yesterday’s article I mentioned some ways we can use numbers like our insulin sensitivity factor. Here’s another.

If we see our BG climbing steadily, we usually know something’s going on. It could be that the food we ate had a larger effect than we expected (such as the carb count was underestimated). 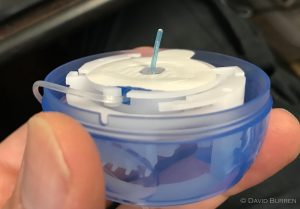 Or maybe the insulin isn’t getting in, or has “gone off” (e.g. due to heat). Especially after putting in a new cannula I tend to keep an eye on my CGM to detect if the site isn’t working.

So how can we tell the difference?

We can use the ISF and the basal-rate information to gauge how fast our BG will be rising if we’re getting no insulin (assuming no unusual food/exercise/etc is going on too). Once the previous basal insulin has worn off, we can predict the rise we expect from the missing insulin.

If we know the basal rate that that point (BASAL U/hour) and assuming that was the correct dose to keep us level, then the hourly rise will simply be

Our basal rate is usually not the same across the entire day, as the body’s needs change on a diurnal cycle.

But if we know that at this time of the day we should be getting BASAL units/hour, we can do the calculation. Let’s use the people from the last article:

Yes just like yesterday those are real examples from real people. As you can see there’s a lot of variation! And again the ISF by itself won’t determine the rise rate (there are two different examples there that both end up at +0.2).

If your own ISF and basal rates are correct, you should be able to predict your own rise-rate for various times of day.

That “rise over 5 minutes” is particularly useful, as most CGM software will show you the rise since the last reading (and sometimes the average rise over the last few readings).

So as I know my own likely rise rate, if I see a continual rise of that rate that correction boluses are not touching, it’ll be fairly clear that my insulin isn’t working and it’s time to switch back to the previous cannula to give a correction bolus while I sort out a fresh site!

Mind you, adding food on top of this can obscure any obvious rise. For this reason it’s usually a good idea to not insert a new cannula immediately after a meal!