Like many people, I usually put tape covers over my CGM sensors. Initially it was to make sure they stayed in place for their full life, even when I was spending lots of time in tropical waters. With the Dexcom sensors I find it has other benefits too:

These have helped me keep sensors running for a long time. Before we had the NDSS CGM Subsidy there was a lot of incentive to make these expensive sensors last as long as possible. My record for a G5 sensor was >50 days (although my average was much smaller). My average sensor life with G6 sensors has turned out to be around 16 days.

I’ve used many things over the years, including RockTape (both from RockaDex and RockTape I’ve cut to shape myself) but eventually settled on clear medical tapes. Earlier this year I found a new option though, which is what this article is about.

Note that this is different from the regular Opsite Flexifix.

This is a silicone-based dressing. Not only is it unlikely to cause skin irritation (which admittedly has not been a problem for me with any of the dressings anyway) but it also can be removed easily when needed.

It’s not a coincidence that devices like the the Eversense transmitter (which is supposed to be removed/re-attached daily) and the Upright Go posture trainer also use silicone adhesives. 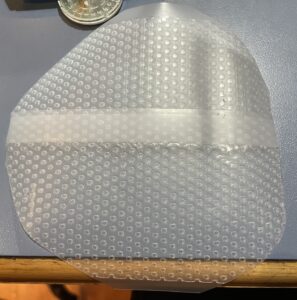 I buy the 10cm-wide roll, and cut a square from the end, then roughly round the corners off with scissors (makes it less likely to peel/lift). I keep a stack of these in a ziplock bag with my CGM sensors. 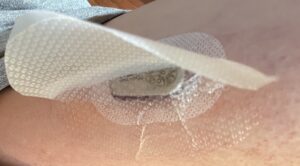 This sensor was being installed on the back of my upper arm.

As you can see earlier. the backing is in two halves. After the sensor’s in and warming up, I remove half of the backing and stick it to transmitter then push out to one side. 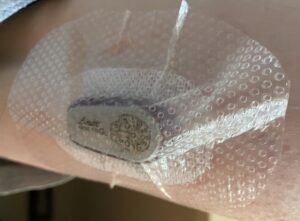 I then remove the other half of the backing, and seal the dressing down to the other side. I actually stretch the skin away from the sensor slightly while doing this, so when it relaxes the tape won’t be pulling across the skin surface.

You can see I’ve deliberately left the ends un-stuck. 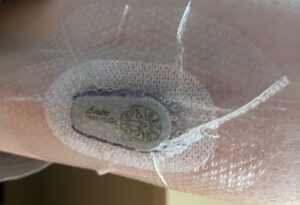 I then pinch in at each end of the transmitter (to minimise the bubble of air that might be trapped inside) and push out to the edges.  This example wasn’t perfect, but you get the idea.

The extra dressing ends up in folds as you can see, but they are unobtrusive.

Here you can see this same sensor after 7 days of wear: 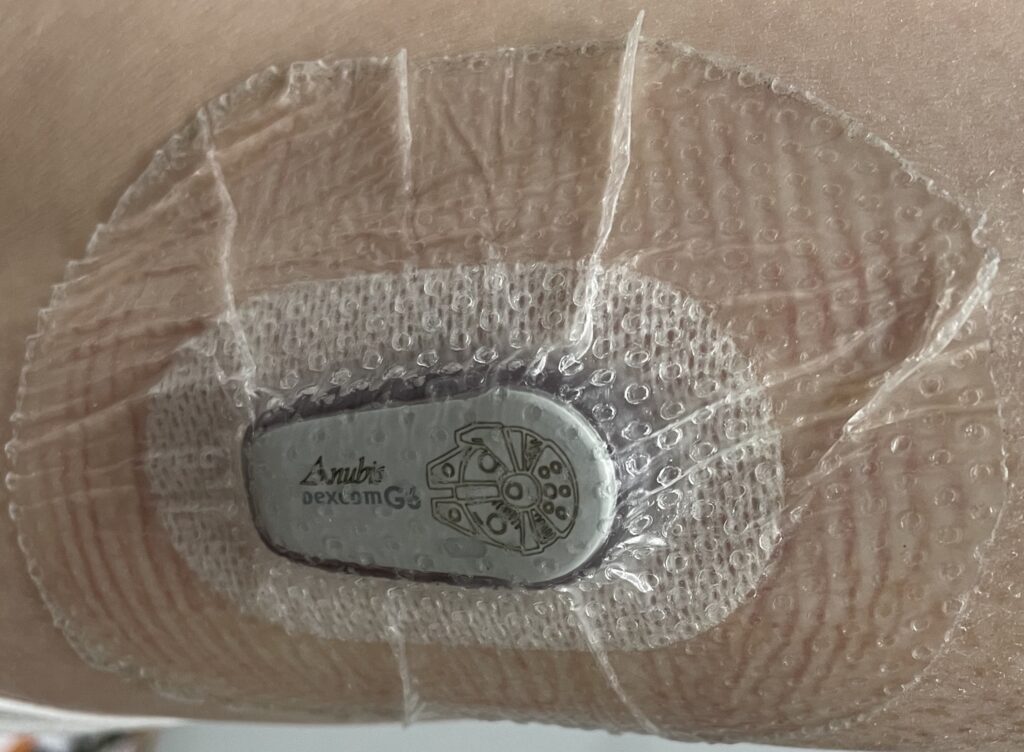 Obviously I’ve covered the entire thing including the transmitter. Admittedly Dexcom advise to not do this.

I have done this for long with with various dressings, and my transmitters are able to communicate unimpeded. They’re medical dressings, and I think of them as designed to maintain the moisture levels underneath as appropriate for healing skin. I’ve never had irritation occur under the tape.
The only times I’ve had water trapped inside was when it was worn out and no longer sealed appropriately at the edges (or there was a hole in the tape). Maybe twice in 4+ years.

The dressing is labelled as being appropriate for up to 7 days use. But I have worn it longer. 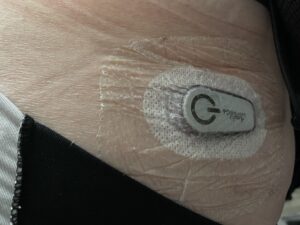 This sensor had been in place for 13 days when I decided to remove it. As you can see, the dressing is still stuck fairly securely.

It was on my upper bum (that’s my underwear rolled down) and it’s a gymnastic exercise to photograph back there, so please excuse the poor lighting! 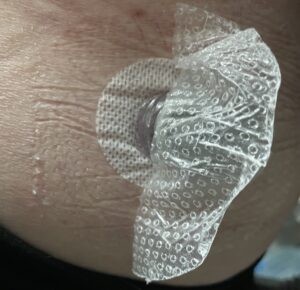 I worked away at an edge with my fingernail and then started peeling it back.

As you can see, the sensor underneath gets left behind! 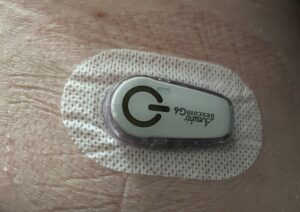 Once it all comes off, the sensor is physically almost pristine.

I apply the dressing almost as soon as the sensor is inserted. So the white tape has no chance to gather grime/dust. Consequently there’s no ring of adhesive bonded with grime. That can leave sticky gunk left behind on both the skin and the transmitter.

When the sensor itself is removed, my skin is clean!

I have not yet used this with swimming. If it turns out to be not robust against that I will probably fall back to regular Opsite Flexifix for those periods. However that doesn’t remove as neatly.

That’s much thinner stuff, so when using that when the edges eventually start to lift I trim them off with nail scissors to avoid them catching on things, and if the dressing shrinks enough I simply apply another layer over the top! But when removing the regular Opsite Flexifix it maintains a good hold on the sensor. If I need to remove the transmitter for some reason I would end up just cutting the dressing around the transmitter itself, leaving the Opsite on the outer area.

I’ve decided I’m mostly going to use the silicone-based dressing from here on though.