The Dexcom G6 CGM system is relatively flexible, although many people don’t understand how it works. But a little knowledge goes a long way. 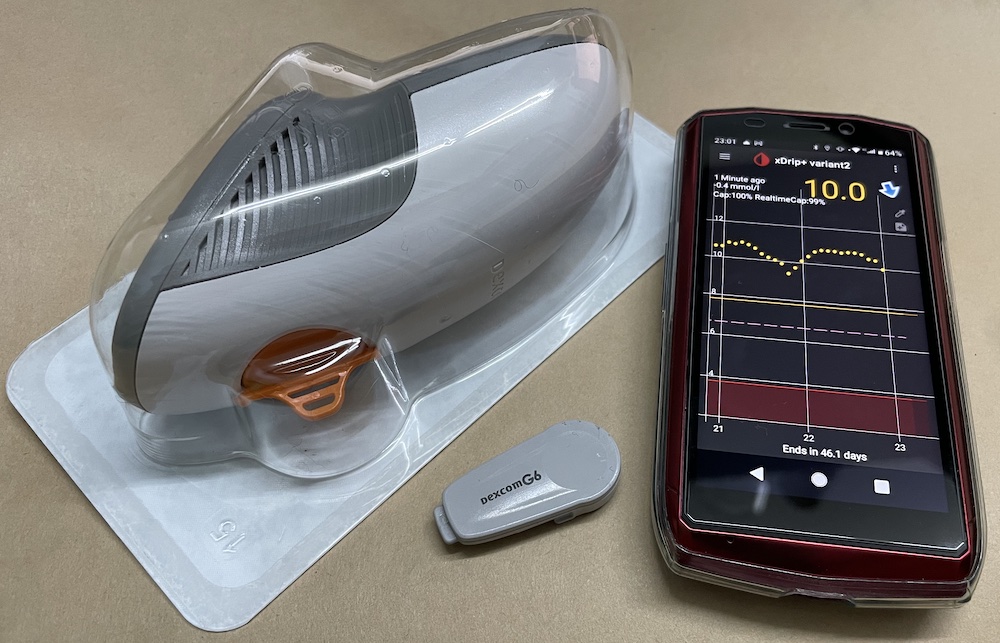 The basics are an obvious start. We have:

I’ll explore some of the use of the system (from the point of view of how the technical details affect how we have to use it). I’ll finish with the example of how we can do things like move a running sensor session between phones.

If this is the first sensor this transmitter has been in, it wakes from factory hibernation and prepares to pair with something via Bluetooth. If the transmitter is already out of hibernation it will wake up every 5 minutes. 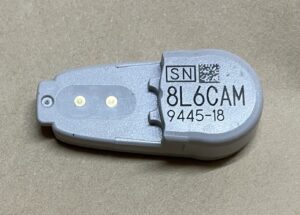 It’s actually possible to fool a transmitter into waking up from hibernation to pair without using a sensor, just by holding your finger on the sensor contacts for long enough. Of course you should clean the contacts (e.g. with an alcohol wipe) before inserting into an actual sensor.

Once a transmitter has been activated, it starts a timer going. Once it gets to 100 days it will refuse to start new sensor sessions (Dexcom’s assumption is that some batteries will start to fail some time after that, and customer support is much easier if they avoid that). The Anubis G6 transmitters use larger batteries, and their timer can max out at 180 days.

Once the limit has been reached, no new sensor sessions can be started. The standard Dexcom G6 needs to be replaced entirely, but the Anubis G6 can be reset (using the same Bluetooth commands that worked on G5 and on early G6 revisions) at which point the transmitter goes back into hibernation with the day counter set to 0. Alternately, replacing an Anubis’ battery automatically causes a reset.

Usually a G6 transmitter is only paired with one device (e.g. a phone). But it can maintain pairing with up to two devices. They’re separated into “slots”.

Slot 2 is for “phone” applications. Examples include:

Slot 1 is for “medical devices” or “receivers”. Examples of this are:

The transmitter allocates a host device’s Bluetooth address to a slot, and it will communicate with both devices (if configured) every 5 minutes. Probably the most common scenario where people use two slots is where they use a Tandem pump (on slot 1) and the Dexcom phone app (on slot 2).
Many people use only one host application, but the facility for 2 devices is there. Actually Anubis G6 transmitters have three slots.

So the G6 can talk to a phone app AND to a t:slim pump at the same time, but not to two apps (with the exception of xDrip+ in special configuration).

Do note that there’s no point in having both slots pointing to the same phone. The slot doesn’t associate traffic with a particular app: just a particular host device. And if two apps on the same phone are trying to talk to the same transmitter they’ll just compete for the chance to see something every 5 minutes.

An application (from either slot) can send a “Start Sensor” command to the transmitter. This command effectively includes a 4-digit sensor code (found printed on each sensor’s paper cover) which is used by the transmitter in managing “auto-calibration”.

The command doesn’t actually include that code verbatim, but rather some constants derived from it. But that’s a detail that most people don’t need to know.

The transmitter must be connected to an actual sensor when it receives the Start Sensor command. If no sensor session is already running, the transmitter begins warming up the sensor using that code, and eventually starts returning glucose data. In the standard G6 transmitter the warmup period is 120 minutes (it was shorter in the Dexcom G6+).

If a sensor session is already running (e.g. it was started from the other host device) then the sensor code is ignored, and the transmitter immediately starts returning glucose data. In fact, most applications will immediately fill in the last 3 hours of glucose data!

Applications tend to have a “skip” or “no code” option, which can be regarded as using the sensor code 0000. If the sensor session is already running then this is fine. However if you use this option to start a session from scratch, the transmitter will disable auto-calibration (see below) and repeatedly ask you for calibration fingerpricks (similar to the G5).

The standard G6 transmitter will auto-terminate a session after 10 days (incidentally, the G6+ was 14 days).

The G6 is designed to “auto-calibrate” and not require regular blood sacrifices to calibrate it. This is partly because poor calibration technique has probably been the largest source of inaccuracy for CGM systems.

However sometimes the system does benefit from a manual calibration. An example that springs to mind is if you’ve started a sensor session a long time after the sensor was inserted. Usually in that case the system ends up returning artificially-high numbers, but a single well-placed calibration can bring it back into line.

The calibrations are maintained within the transmitter for that sensor: calibrating from one host application will affect the data seen on both slots (although it may take 5 minutes for the change to be noticed).

Giving it a calibration once doesn’t mean you will need to keep calibrating it. And in general it’s best not to:

Remember calibrations are a big source of errors!

After the transmitter has finished talking to a host device (or given up because the host for that slot didn’t respond) the transmitter puts itself to sleep for almost 5 minutes to save battery. After that it wakes up, measures the sensor glucose, and then tries to talk to its host devices again (or accept a new pairing).

Some applications report BG values plus with the number of minutes since the last number: you would expect that to roll back to 0 every 5 minutes (unless you walk away from your phone at the wrong point). I sometimes wish all apps did this: it’s very useful to know how old that BG number is.

It’s worth keeping this 5-minute delay in mind. For example if you start a sensor via your phone, it might be 4 minutes before the transmitter actually receives the Start Sensor command and starts the warmup. Eventually when the phone says the warmup is over, it could then be another 4-9 minutes before you actually see data.

Here’s an example where the 5-minute delay can actually be useful. Essential in fact! Occasionally we may want to transfer from one phone to another. Using the above information, we don’t have to start a new sensor to do this!

One example may be when swapping from the Dexcom G6 Mobile app on an iPhone, over to CamAPS FX on an Android phone.
Both devices will be wanting to use the same slot, so we have to stop one before connecting the other. But the trick is to not tell the transmitter to Stop Sensor.

We could tell the Dexcom app to instead talk to a different transmitter (e.g. the imaginary “800000”) but it won’t let us pair a new transmitter without first stopping the sensor. But we don’t want the transmitter to stop the sensor session!
One solution might be to simply uninstall the Dexcom app. But that’s a bit heavy-handed.

We can try an alternate method, but we need to do things in order, and at particular times. Of course, this is assuming you have a sensor session running, not about to expire while you’re doing this.

On the old phone:

Then on the new phone:

Once the system pairs with the transmitter and sends the Start Sensor command, the transmitter won’t restart the sensor session but it can automatically download the last 3 hours of data. It should suddenly spark into life: there is no warmup period!

If you’d been too slow between steps 2 and 3 above, the Stop Sensor command may have been sent to the transmitter. At which point a standard Dexcom transmitter will refuse to restart the sensor, and the exercise was a bit of a waste of effort. Step 1 is in there to give you as much time as possible to get through the next steps.

That’s about it. The same technique can be used if you’re swapping between one application and another on the same phone. Just remember that only one app on the phone can talk to the same transmitter at a time.

8 thoughts on “Moving a Dexcom G6 sensor between phones”